Linux HD Satellite Receivers are amongst the best satellite receivers a person can buy, they can be operated as basic free to air satellite receivers giving you access to a wide range of free Saorview + Satellite HD channels, the channels you will receive depends on what size your satellite dish is and also what satellite your dish is looking at. Let suppose you have a standard Zone 2 satellite dish pointed at Astra 2 ( 28.2east ) and a TV Aerial , and a Linux receiver, this will give you access to all the free to air TV and Radio channels on that particular satellite plus all the National Irish TV Channels like RTE1 HD, RTE2 HD, TV3, TG4, RTE NEWS NOW, Now lets suppose you have a 90cm dish pointed at Astra 1 ( 19.2east ) this arrangement will give you over 800 free to air european TV and Radio channels. Lets take it one step further, lets say you download a softcam key file and upload it via USB to your Linux receiver, this will now open some pay tv channels. Linux receivers are also suitable for Card Sharing. Card sharing is the term applied to the act of sharing the information on one viewing card between 2 or more linux HD receivers, so you could have a dish pointed at Hotbird with a pay tv viewing card in one Linux receiver which in turn is broadband connected via its LAN port. This viewing card can in turn be shared with a second Linux HD receiver in say a bedroom or playroom, the second Linux HD receiver will also need to be Broadband enabled giving you multiroom at no additional cost. 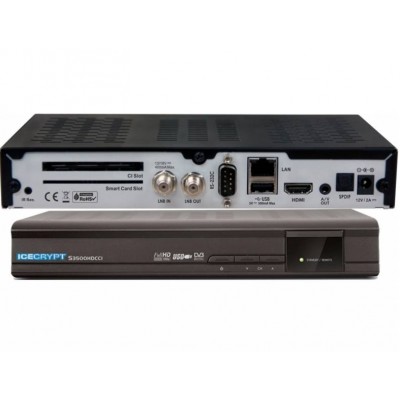